Today I would like to share something about the robot simulation software that Shuwai and I are working on: Webots. You may download webots from here

Webots is a robot simulation software that is widely used in industry, education, research. It is a proprietary licensed software before the release of R2019a version, then the good news is it is released under free and open-source Apache 2 license. Webots provides a complete development environment to model, program and simulate robots. Webots includes a set of sensors and actuators frequently used in robotic experiments, e.g. lidars, radars, proximity sensors, light sensors, touch sensors, GPS, accelerometers, cameras, emitters and receivers, servo motors (rotational & linear), position and force sensor, LEDs, grippers, gyros, compass, IMU, etc. The robot controller programs can be written outside of Webots in C, C++, Python, ROS, Java and MATLAB using a simple API.

Webots offers the possibility to take screenshots and record simulations movies. Webots worlds are stored in cross-platform .wbt files which format is based on the VRML language. It is also possible to import and export Webots worlds or objects in the VRML format. Users can interact with a running simulation at any time, i.e., it is possible to move the robots and other object with the mouse while the simulation is running. Webots can stream a simulation on web browsers using WebGL.

The following hardware is required to run Webots:

The following operating systems are supported:

Webots may work but is not officially supported on earlier versions of the above mentioned operating systems.

Other versions of Webots for other UNIX systems may be available upon request.

Webots officially supports only recent NVIDIA and AMD graphics adapters. So it is recommended to run Webots on computers equipped with such graphics adapters and up-to-date drivers provided by the card manufacturer (i.e., NVIDIA or AMD). Such drivers are often bundled with the operating system (Windows, Linux and Mac OS X),

On Linux and Windows, you should make sure that the latest graphics driver is installed. On the Mac, the latest graphics drivers are automatically installed by the Software Update, so Mac users are not concerned by this section. Note that Webots can run up to 10x slower without the appropriate driver. Updating your driver may also solve various problems, i.e., odd graphics rendering or Webots crashes. Since I am a window user, so I will focus on the window os. The guide for linux os can be obtained from here.

Upgrading the GPU Driver on Windows

A Webots simulation is composed of following items:

What is a World?

A world, in Webots, is a 3D description of the properties of robots and of their environment. It contains a description of every object: position, orientation, geometry, appearance (like color or brightness), physical properties, type of object, etc. Worlds are organized as hierarchical structures where objects can contain other objects (like in VRML97). For example, a robot can contain two wheels, a distance sensor and a joint which itself contains a camera, etc. A world file doesn't contain the controller code of the robots; it only specifies the name of the controller that is required for each robot. Worlds are saved in ".wbt" files. The ".wbt" files are stored in the "worlds" subdirectory of each Webots project. The image shown here is an example of world file from top view in the sample world: factory. 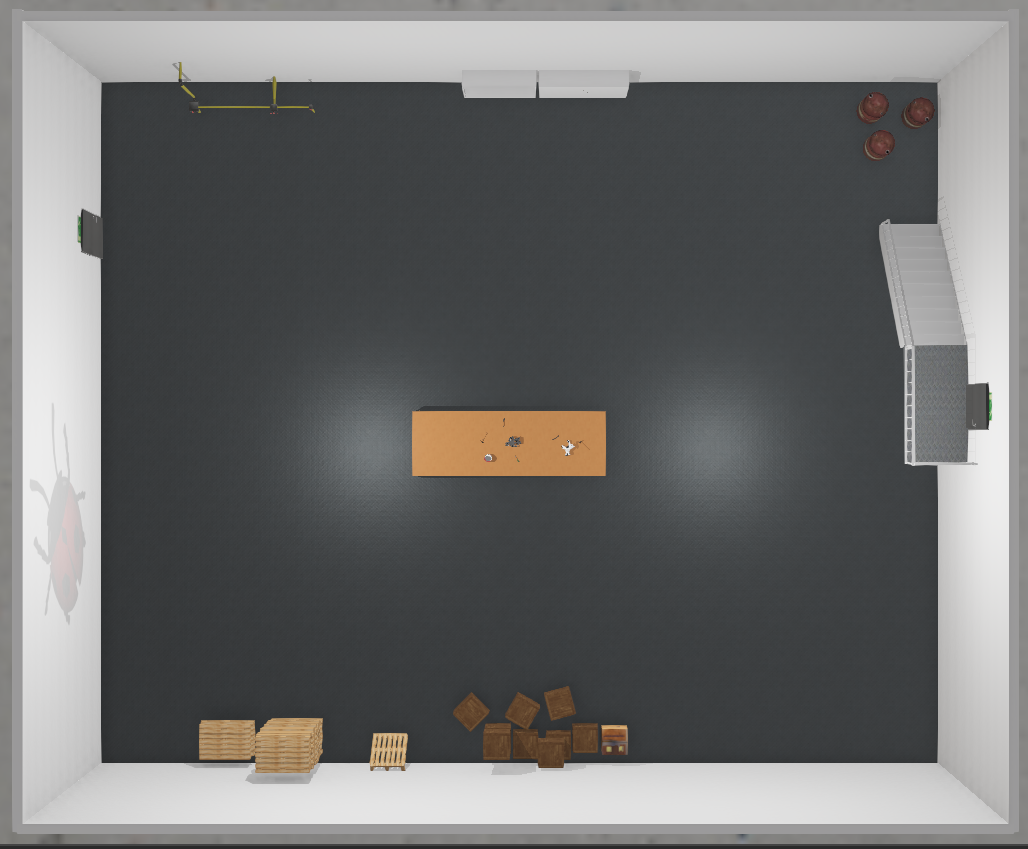 What Is a Controller?

A controller is a computer program that controls a robot specified in a world file. Controllers can be written in any of the programming languages supported by Webots: C, C++, Java, Python or MATLAB. When a simulation starts, Webots launches the specified controllers, each as a separate process, and it associates the controller processes with the simulated robots. Note that several robots can use the same controller code, however a distinct process will be launched for each robot. 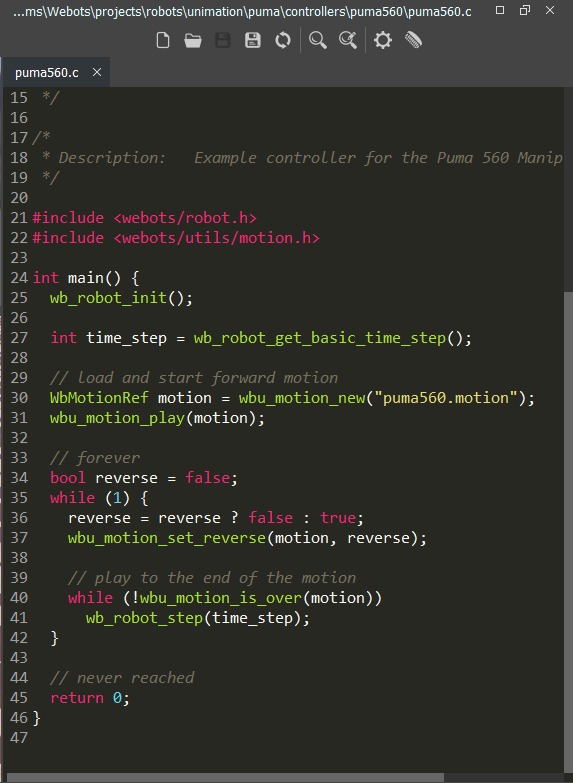 What is a Supervisor Controller?

This chapter gives an overview of sample worlds provided with the Webots package. The example worlds can be tested easily; the ".wbt" files are located in various "worlds" directories of the "WEBOTS_HOME/projects" directory and can be directly opened from Webots using the Open Sample World item in File menu. The controller code is located in the corresponding "controllers" directory. This chapter provides only a short abstract for each example. More detailed explanations can be found in the source code. Below is the list of sample projects by webots which is very interesting to play with.

Webots provide tutorials to start up a project too. The tutorials provided by webots is definitely sufficient to build a mini robot from scratch. If you are tired of reading, there is a youtube playlist that show a better visualisation for every single step that you have to know to start with your customized project. You are refer to here for the video playlist. Although the content is slightly different, but I personally think it is good to read and watch the video to know what is happening.

Well, now you can start to play with it. Hope you have a wonderful experience. Enjoy!

if you are coding using C++ or C, make sure you remember to build/compile the code for you to able to see the changes you made. There are sometime bug in webots where you couldn't see it after you compiled, all you have to do is just restart webots.